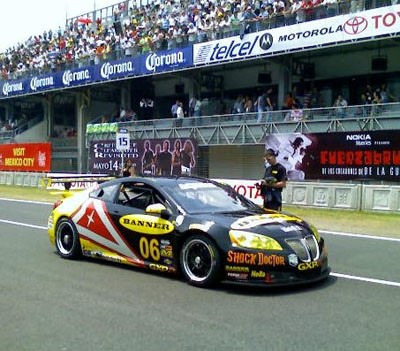 Chris Prey will be racing in the RumBum.com 250 at Mazda Raceway Laguna Seca in Monterey, CA on May 16-17, 2008. He’ll be driving the #06 Banner Engineering Pontiac GXP.R alongside teammate Leighton Reese in the Grand-Am Rolex Sports Car Series’ GT Class. This race will be televised on Speed Channel Sunday, May 18th at Noon Eastern/11am Central time.

Chris met Leighton and members of the GM Racing Program while on the set of Speed Channel’s racing reality TV show, “Setup” Season 2 in October & November of 2007. That series had its debut broadcast on February 21st, 2008 and started with over 60 potential competitors that had been chosen from more than 2,500 applicants. The field was then cut to 24 drivers and their personal crew chiefs to drive 12 Silver Pontiac Solstice GXP’s for the chance to win $100,000 and a test drive in the Pontiac GXP.R racecar. There were many twists and turns to maneuver through, both on the track during elimination races and off the track when back at the GM Goodwrench Tech Center. The season finale was televised on April 10th, 2008 and it proved to be a very exciting finish. In the end, Chris Prey emerged from the pack as the Overall Winner & Champion of the show and performed some wicked donuts for all those in attendance.

The Banner Racing team asked Chris to join them as a driver changer for the #06 car at the March 27-29 Gainsco Grand Prix of Miami and he gladly accepted. A couple weeks later, Chris got to put one of his trade skills to use as he assisted in co-driving the team’s semi tractor/trailer carrying the 2 Banner racecars #06 and #07 to Mexico City, MX for the Mexico City 250 at Autodromo Hermanos Rodriguez. The convoy then pressed on to the next race which was the following weekend, April 26-27 for the Bosch Engineering 250 at Virginia International Raceway. Chris learned a lot about the car and its characteristics over this period of time while getting to listen and work directly with Leighton and his co-pilots Jan Magnussen, Ron Fellows, and Marc Bunting. This experience also allowed Chris the chance to build camaraderie with members of the crew and the engineers from Pratt & Miller.

During all of these racing adventures, Chris gained the confidence of the Banner Racing team along with members of the GM Racing Program and was approached with an extraordinary opportunity to waive the Pontiac GXP.R test drive for the chance to pilot the car in a full race weekend. The RumBum.com 250 at Mazda Raceway Laguna Seca will quickly be upon us, so watch and root for him on Speed Channel in the black, yellow, and red #06 Banner Engineering Pontiac GXP.R as he trys to “Get in and Win”!

Obviously, I’m humbled that they have the confidence in my racing background and throughout our recent dealings and formation of relationships to give me this amazing opportunity to showcase my talents over the course of a race weekend. I know that having never tested the car, I’ll be facing a steep learning curve, but I welcome the challenge and am looking forward to driving the car and working with the crew and engineers to find the right setup compromise between Leighton’s driving style and my own so we can keep this Pontiac out in front where it belongs.