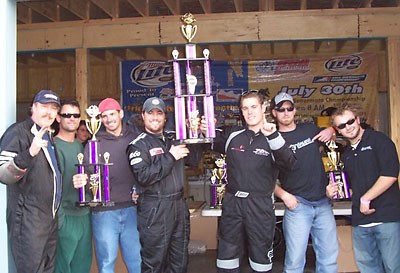 SHAWANO, WISCONSIN – After 100 laps of intense racing, the Prey Racing Team that consisted of drivers Chris Prey and Derek Lang came out on top of the podium in USA International Raceway’s annual 100 lap endurance race. With lightning fast driver changes, refueling strategy, and great chassis maintenance being performed by Michael Lang, the team ran a flawless race and earned its maiden endurance race victory. After two hours of racing, the margin of victory was a scant 43 seconds.

“I really enjoyed competing in this event, and I learned some valuable lessons about conserving the equipment throughout the run while picking-off traffic at the right moment to keep up the quick lap times.” said Prey. “Driving the shifter against other 2 cycles and the 4 cycle carts was like running a prototype car in the ALMS. The closing speeds on the other karts was impressive and demanded quick, decisive decisions in the brake zones.”